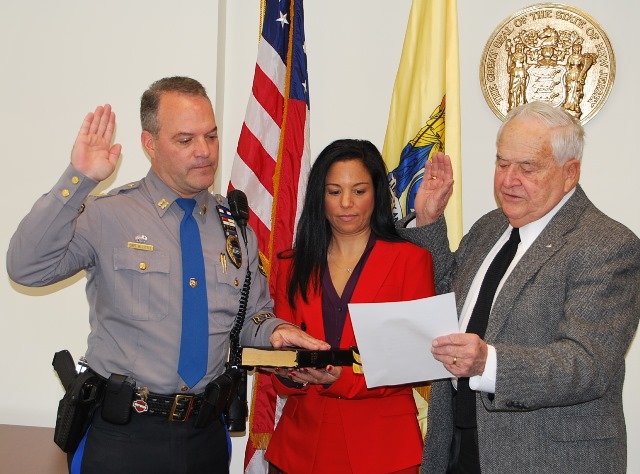 Captain Mitch Little is now the Chief of Police of Toms River Township.  Mayor Thomas F. Kelaher has officially sworn him on January 1, 2014.

To become Chief of Police, Capt. Little signed the formal documents at town hall on Monday morning, December 30th, in anticipation of the retirement of out-going Police Chief Mike Mastronardy, who will become the new Ocean County Sheriff. Mastronardy’s retirement is slated to begin on 12-31-13 at 11:59 pm.

According to J. Mark Mutter, Township Clerk,  “The oath of office takes effect on1-1-14, pursuant to the resolution of the governing body on Dec, 23, 2013. Mayor Kelaher said it was necessary to swear in Capt. Little ahead of time “so that there is no interruption in leadership at the Police Department.”

“The first of this year, Mitch Little will assume the duties of Toms River Police Chief, with a ceremonial swearing in on January 7th at the Council re-organization meeting,” Mayor Kelaher stated.

Upon notice of his nomination, Capt. Little said, “I am dedicated to ensuring the safety of our residents. I will continue to provide the public with the outstanding service this Police Department has given and has grown to expect.”