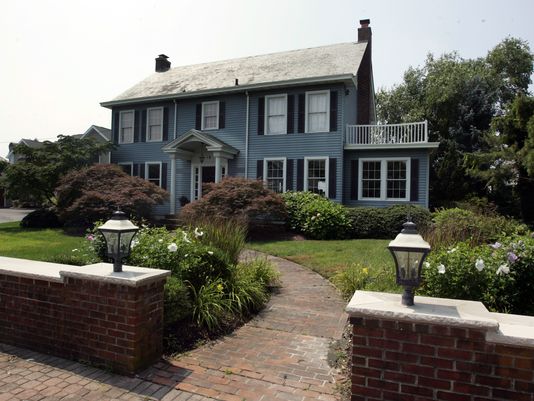 The Amityville Horror is a 1979 American supernatural horror film, directed by Stuart Rosenberg, based on the Jay Anson's bestselling 1977 novel of the same name. It is the first film in the Amityville Horror franchise. A remake was produced in 2005.

The story is based on the alleged real life experiences of the Lutz family who buy a new home on 112 Ocean Avenue in Amityville, New York, a house where a mass murder had been committed the year before. After the family move into the house, they experience a series of frightening paranormal events.

DID YOU KNOW......The on-location scenes of The Amityville Horror were filmed at a house in Toms River, New Jersey, (above) which had been converted to look like the 112 Ocean Avenue home after the authorities in Amityville denied permission for filming on the actual location.

Exterior scenes were also filmed in Toms River and Point Pleasant Beach. Local police and ambulance workers would play extras in the film, while the Toms River Volunteer Fire Company was used to provide the rain during several scenes.